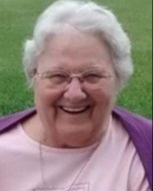 Born November 16, 1936 in the Town of Alabama, she was a daughter of the late Clifford and Lillian (Barnes) Hillyard. Mrs. Burns grew up in the Medina area and worked for the L Motel and various stores in the area. She went on to work for BernzOmatic, and retired after 27 years.

Her graveside committal service in West Ridgeway Cemetery will be held at a later date to be announced. In lieu of flowers, memorials may be made to Niagara Hospice, 4675 Sunset Drive, Lockport, NY 14094. Arrangements are in the care of Cooper Funeral Home, 215 W. Center St., Medina.

To order memorial trees or send flowers to the family in memory of Jeanette R. Burns, please visit our flower store.