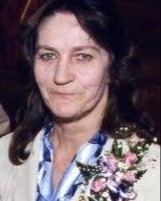 Rita A. Pfenninger (née Hartman), died on June 29, 2021.  She was born in Batavia on December 2, 1949 to George and Eleanor Hartman (née Schneller).  She had spent considerable time in various communities – Elba, Chicago, Bergen, Byron, and later in life, Akron, Medina, and Lockport.  Rita enjoyed cheering for the Pittsburgh Steelers, listening to Alabama, and spending summers at “camp” – Leisurewood in Akron.  She also liked to spoil her dog, Ben-G.  Rita was predeceased by her parents; her daughter, Wendy Cayea; her husbands, Wayne Cayea and Raymond Pfenninger; and her brother, Douglas Hartman.  She is survived by her children Wayne (Adrienne) Cayea and Jessica Pfenninger; brothers, Robert (Camilla) and Wayne (Donna) Hartman; nieces, nephews, grandchildren, and great-grandchildren.  A memorial service will be held at a later date.  Rita’s arrangements are in the care of Cooper Funeral Home, 215 W. Center St., Medina.

To order memorial trees or send flowers to the family in memory of Rita A. Pfenninger, please visit our flower store.
Send a Sympathy Card