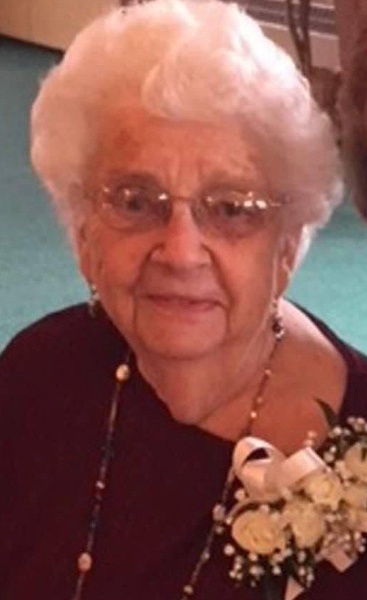 She was born on January 26, 1931 in Somerset, New York a daughter of the late Mildred (Ray) King and Dudley LaPort King. She started school in Niagara Falls, New York and moved to Winston Salem, North Carolina when she was in 6th grade. She came back to live in New York in 7th grade and moved to Medina in 1946. Sally was asked to go to a school dance with Jim Lindsay, they became high school sweethearts and then they married in May of 1953. They resided in Medina where they raised their family. Sally's greatest joy was being with her family. She was a devoted wife and mother. She was very involved as a parent and was always there to lead a Brownie/Girl Scout/Boy Scout troop activity, go camping or help out in some other way and she was always available to babysit and quite often cared for her grandchildren during the summers when they were younger. In her later years she enjoyed reading, watching TV and seeing the world pass by her huge picture window. Sally was a member of the Grove United Methodist Church in Medina.

She was predeceased by her husband, James Lindsay and her daughter in-law, Cynthia Lindsay.

Her graveside committal service will be held in Boxwood Cemetery at a later date. The family appreciates any memorials to be made to The Grove United Methodist Church, 11004 W. Center St., Medina, NY 14103 or to a charity of one's choice. Arrangements are in the care of Cooper Funeral Home, 215 West Center Street, Medina. Share memories and condolences at www.cooperfuneralhome.com

To order memorial trees or send flowers to the family in memory of Sally M. Lindsay, please visit our flower store.