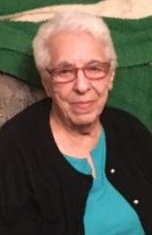 Anita M. Virga, 85, of Medina entered into rest on April 30, 2020 at the Villages of Orleans Health & Rehab Center in Albion.

Born September 22, 1934 in Buffalo, she was a daughter of the late Samuel and Anna (Rosen) Jadofsky. On April 18, 1953 she married the late Frank A. Virga, Jr. In the late 1960’s they moved to the Medina area, where they raised a family of nine children. Mrs. Virga worked for many years at Fisher-Price Toys in Medina and then for BernzOmatic. She was a parishioner of the former Sacred Heart of Jesus R.C. Church and then Holy Trinity Parish, St. Mary’s Church. Active in her community, Mrs. Virga was a member of the Court Santa Maria #295, Catholic Daughters of the Americas, the Red Hat Society and the Buffalo Doll Club. She was an avid bowler and also enjoyed doll making.

Mrs. Virga was predeceased by her husband, Frank Virga, Jr. in 1993.

Her graveside committal service will be held on Monday, Aug. 3rd at 10:00 a.m. in Sacred Heart Cemetery, Medina.

In lieu of flowers, memorials in Anita’s name may be made to Holy Trinity Catholic Parish, 211 Eagle St., Medina, NY 14103. Arrangements are in the care of Cooper Funeral Home, Medina.

To order memorial trees or send flowers to the family in memory of Anita M. Virga, please visit our flower store.