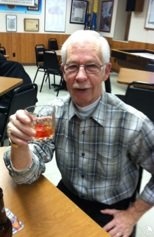 Mr. Fearby was born in Medina, April 3, 1936, a son of the late Clifford W. and Mildred (Chase) Fearby, Sr.  A graduate of Medina High School, class of 1954, he played with the Medina MACS semi pro football team and proudly served with the US Navy Submarine Force from 1954-58.  He married the former Carol Kelly in 1959.  Cliff was the founder and CEO of F & H  Fearby Enterprises for 50 years.    Cliff enjoyed spending time at his cottage on Lake Ontario and fishing.  Cliff was a member of Lincoln Post #1483, VFW, Butts-Clark Post #204, American Legion, and Jr. Wilson Sportsman’s Club.  He loved his grandchildren, Kara, Nick and Markie and his great granddaughter, Charli.

Friends may call on Monday (2-4, 7-9) at the Cooper Funeral Home, 215 West Center Street, Medina, where his service will be held on Tuesday at 11AM.  Phil Keppler, chaplain of the Shelby Vol. Fire Company will officiate.  Military honors will be accorded at the funeral home by members of Lincoln Post #1483, VFW and Butts Clark Post #204, American Legion.  Interment will be in St. Mary’s Cemetery.  A luncheon will be held at the VFW, 216 East Center Street, Medina, following his funeral.

Cliff’s family extends a heartfelt thanks to the members of the Medina Fire Department and the staff at Medina Memorial Hospital Second Floor and North Wing for the wonderful care he received during his illness.

To order memorial trees or send flowers to the family in memory of Clifford W. Fearby, Jr., please visit our flower store.