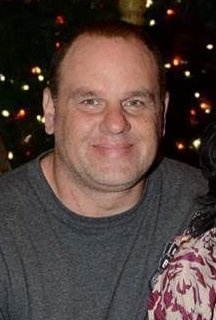 Curtis S. Bobzien , 46, of Middleport passed away on Tuesday, July 14, 2020 at home surrounded by his family after a brave battle with cancer.

Born February 11, 1974 in Lockport, he was a son of the late William E. and Linda A. (Duwe) Bobzien. Cherished husband of Marla (Kelley) Bobzien and step-father to Ryan D. Townsend. Curt graduated from Lockport High School in 1992 and received his associate’s degree from NCCC in August 2018. He worked as an I.T. Specialist for many years. He was also a member of Trinity Lutheran Church in Lockport.

Curt was a member of the YMCA boys swim team from 1978-1992 and was on the high school varsity swim team. Curt held numerous swim records throughout his amateur swim career, starting at age 9 with a NYS title in the 25 yd. freestyle and, to this day, holds the Lockport High School record in the 400 yd. freestyle relay set in 1990 with Mike Treadway, Jim Newton and Joe Esposito. Curt was a volunteer swim coach for the YMCA boys and girls swim teams. He could always be found on the sidelines of a soccer game, in the stands at a swim meet or hockey rink cheering on his nieces, nephews and many other kids that he coached. He was a mentor to many. His hobbies included golfing, fishing, camping, cooking, traveling and spending time with his family and three loving dogs. He enjoyed watching Nascar, was an avid Sabres fan and loved traveling to the Thousand Islands.

In addition to his loving wife, step-son and pups, Curt is survived by his siblings, Kristine Hamilton, Jeffrey (Teresa) Bobzien and the late Kimberly Bobzien; son in-law of Roseann (Jack) Diel; brother in-law of Amy (Joe) Bork and Lisa (Dave) Poole; uncle to Seth and Kimberlee Hamilton, Taylor and Jordyn Bobzien, Stephanie, Renee (Mike), Lyndsay, Aaron, Joey and David; as well as four great-nieces and nephews; and many friends.

There will be no prior visitation. A memorial service for family and friends will be held at a later date. Arrangements are in the care of Cooper Funeral Home, 215 W. Center St., Medina.

To order memorial trees or send flowers to the family in memory of Curtis S. Bobzien, please visit our flower store.