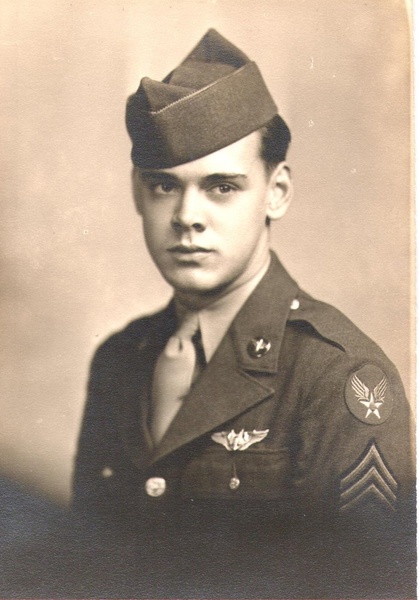 Mr. Donald E. “Pete” Myhill, of Medina, passed away on Friday, September 16, 2016 at Orchard Manor Nursing Home. Mr. Myhill was born in Medina, October 17, 1923 a son of the late Earl and Ruth (Gage) Myhill. A graduate of Medina High School, class of 1942, he was drafted into the US Army Air Force on Feb. 16, 1943. After basic training, he was sent to Armament School in Colorado, then Gunnery School in Texas. He was assigned to T.G. Olsom’s Crew as a Ball Turret Gunner on a B-24 bomber. After completing bomber and photo recon training, he was assigned to the 5th Air Force, 6th Photo Group, 20th Combat Mapping Squadron based in Nadzab, New Guinea on May 22, 1944. Later he was based on Biak Island in Northern New Guinea and Leyte Island in the Philippines. He flew on 47 missions on a B24(F7) and was awarded the Air Medal with 2 Oak Leaf Clusters, the Asiatic Pacific Theatre Ribbon, with 4 battle stars, the Philippine Liberation Ribbon, the NYS Conspicuous Service Cross with 3 Silver Cross Devices gunner wings. He was discharged on October 25, 1945 with rank of S/Sgt. On September 21, 1949, he married the former Virginia M. Britt. Mr. Myhill was employed by New York Telephone Company for 38 years. He served 30 years in management, 9 as a building foreman and the balance in outside plant construction, retiring in June, 1985. He was a Life Member of Butts-Clark Post #204, American Legion, Lincoln Post #1483, Veterans of Foreign Wars, the Telephone Pioneers of America and a former member of Medina Lodge #336, F & AM. Survivors include three children, Larry (Pam) Myhill of Hampstead, NC, Donna Myhill (Joy Gartland) of Rochester and Kirk (Lori) Myhill of Medina; 4 grandchildren, Katie (Johnny) Benson, Anne (Tyler) Krantz, Justin and Erika Myhill; 4 great grandchildren, Jalen and Kelcey Benson and Hailey and Hannah Krantz; several nieces and nephews. He was predeceased by his wife, Virginia, on Sept. 17, 2007 and his brother, Preston Myhill, on Feb. 1990. Friends are invited to attend his Memorial Service on Saturday, September 24, 2016 at 11AM at the Cooper Funeral Home, 215 West Center Street, Medina. Pastor Erik Olsen will officiate and interment will be in Boxwood Cemetery where military honors will be accorded by members of Lincoln Post #1483, VFW and Butts-Clark Post #204, American Legion. Memorials may be made to United Methodist Church, 11004 West Center St. Ext., Medina, NY
To order memorial trees or send flowers to the family in memory of Donald E. Myhill, please visit our flower store.