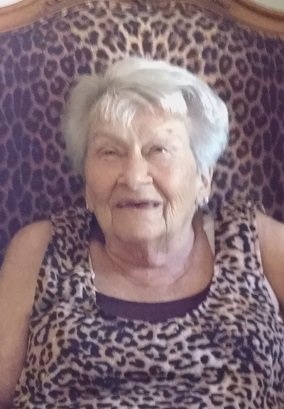 In every community - in every life - there are people who are hubs, keystones on which the wellbeing of everyone around them is braced. The cosmic applecart is upset when they are gone. Dorothy Parker - and the joy and love she gave every person she connected with - carried that kind of strength. When she was young in Buffalo and entered a room, she was magnetic. As a woman in Medina, her joy made everyone feel welcome. As she aged in Medina and Rochester, her smile made every single person who met her feel welcome and comfortable. Even as she entered her twilight at the Landing at Brockport, the vibrant life was extended to her peers entering their end of life phase as well. With no regrets and -   Dorothy Betty Perhach Parker died peacefully and comfortably at Hildebrandt Hospice in Greece, NY, on Sunday, July 9, living a full life to the age of 88.

Dorothy was born October 2, 1928, second of four Czech sisters - a heritage in which Dorothy took an immense amount of pride. Growing up in the Black Rock neighborhood Buffalo, she graduated from Riverside High School.

After World War II, the Perhach family moved from Buffalo to Lyndonville, a shocking move for the city girl Dorothy - Dorothy loved theatre, and  She and her sister Irene would frequent the Medina hot spot, the American Legion, where the cosmopolitan Dorothy met the rugged cowboy farmer Ray Parker, in town working his family’s farm. Sparks flew.

Dorothy and Ray married in 1950, making their home the Bates Road farm in Medina - the city girl and cowboy were known at the markets in Buffalo - the beautiful, urbane Dorothy hitting the Bailey Avenue shopping district with style, being picked up at the end of the day by her husband in his muddy cattle truck returning from selling his wares. Hitting the hot spots in “shit kickers and heels” - they were a loving pair full of contrast and clash, welding together and not parting til they fulfilled their vows.

The family grew, welcoming daughter Debra and son Raymond III, raising a family and legacy of work, joy and love. The farm, with horses, cows, pigs and chickens was a life of work, but Dorothy still made time to be a Girls Scout leader, a Cub Scout den mother, 4H leader,a costume designer for school musicals and to perform with the Theatre of Performing Arts of Medina. Through the years Dorothy, Ray traveled all over the country for fairs, shows, trail rides, or with the family at home, partying with the neighbors and best friends at their home or across the street at the Allis homestead, chasing their children out of mischief in the fields and creeks.

Retirement The 1980s saw her family grow, as both Debbie and Raymond had children of their own. The 5, Evan, Ashley, Dana, Raymond IV and Rory, found themselves in the bright light of their grandma, who treated each one with love and respect and sometimes a swift kick in the ass, all in equal measure - there were never favorites.

Entering old age, Dorothy dutifully cared for her husband, Ray, but still was the vibrant lady in her bright red and leopard-print outfits, brightening every person’s life she entered with her twinkling smile and love. After Ray’s passing, she maintained that joie de vivre until she was ready to go, and left us with dignity and class, as she exhibited her entire life.

Dorothy is predeceased by  husband Ray, her parents Joseph & Mary Perhach of Lyndonville and sister Irene Albone of Ft. Worth, Texas. She is survived by her sisters Elsie Schiavone of Lubbock, Texas, and Carol Perhach of Champaign, Illinois,  daughter Debra Pierce of Rochester, son Raymond Parker III and his wife Katherine, grandchildren Evan, Ashley and Dana Parker Pierce, Raymond IV and Rory Parker and several nieces and nephews.

A memorial service for family and friends will take place at Cooper Funeral Home in Medina on Sunday, July 16, 2017, greeting hours begin at 1PM with a Celebration of Dorothy’ Life beginning at 3PM.

To order memorial trees or send flowers to the family in memory of Dorothy P. Parker, please visit our flower store.