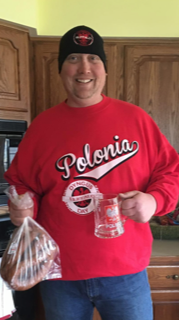 Born June 22, 1977 in Medina, Eric was the son of Edward A. Pluskwa and Janet (Mack) Pluskwa. He graduated from Medina High School in 1995 and went on to attend NCCC. He started his career with Time Warner Cable in 1998 as a line technician and eventually worked his way up to construction coordinator. He was a social member of the Lincoln Post #1483 VFW in Medina, and he was a lifelong San Francisco 49er’s fan. Eric enjoyed his family, pool parties, and his beloved Rottweiler Max, who was always at his side. Eric was known to be the life of the party, many of which he hosted at his home. Most of all, Eric was proud to be a dad to his girls and also “Papa” to his grandchildren.

Calling hours will be held on Wednesday, July 15 from 12-2 p.m. and 4-8 p.m. at Cooper Funeral Home, 215 West Center Street, Medina. Masks and social distancing will be mandatory. His funeral service will be held on Thursday, July 16 at 1:00 p.m., at the Oak Orchard Assembly of God Church, 12111 Ridge Rd., Medina. Interment will be in Boxwood Cemetery.

To order memorial trees or send flowers to the family in memory of Eric J. Pluskwa, please visit our flower store.