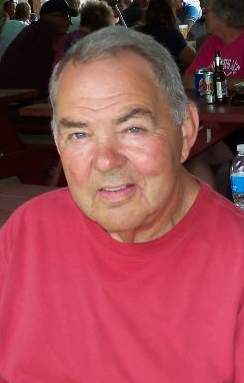 Frank S. Ranallo, Sr. was drop kicked by Jesus through the goalposts of life on January 11, 2022 at the Orchard Manor Rehab & Nursing Center. If you know, you know.

Born on July 6, 1936 in Iona, Michigan, Frank was the son of the late Salvatore “Sam” and Francis “Fran” (Trow) Ranallo. He was a graduate of Medina High School in the class of 1954. Upon graduation he enlisted in the U.S. Marine Corps and served from 1954 to 1957. Frank played for Medina MAAC Semi-Pro Football Team and was co-captain in 1960. Frank married the former Patricia A. Stupnick on November 14, 1964, and they kicked butt in Euchre for nearly 57 years. In the early 1950’s the Ranallo family opened their first bowling center (4 lanes) on East Center St. On Fridays, Frank would hitchhike home from Camp Lejeune Marine Corps Base, in North Carolina, so he could play football with the MAAC’s Saturday mornings and set pins at the lanes on Saturday nights. He would then hitchhike back on Sunday. In July 1961, Frank joined his family as an owner-operator of Ranallo’s Lanes (8 lanes) on North Main St. Finally, in 1986, the business moved to the Maple Ridge Road location, operating 20 lanes.

After retiring from the bowling lanes, Frank drove for Medina Taxi, where he enjoyed talking with patrons and maybe taking "a shortcut" a time or two. He was a lifelong member of Butts-Clark Post #204, American Legion. He was an excellent bowler, even while in the service, and won many awards and competitions over the years. He loved his yard sales. A frequent family outing was to go “saling” with Frank so he could find more treasures to put in the basement. An avid fisherman, Frank also operated Frank’s Rod & Reel Repair.

If he didn’t know your name, you were Stosh or Gladys. If you bowled in a league, Frank treated you to a holiday drink of your choice - every person on every team for a week. He will be remembered by many for his big smile, delicious pizzas and burgers, great sense of humor, generosity, and even some legendary antics. “I’ll race you to the gas pumps and back. Winner buys a round for the bar.” Who remembers that one?!

Family and friends are invited to attend his graveside service with full military honors on Saturday, June 11th at 10am in Millville Cemetery. Afterwards, all are welcome to a luncheon gathering at 12:30pm at the Junior Wilson Sportsman’s Club, 3875 Bates Rd., Medina, NY 14103. In lieu of flowers, memorials may be made to the Orleans County Veterans Service Agency - Van Transport Service, 13996 Route 31 West Albion, New York 14411, or to the Warrior House at www.warriorhouseofwny.com. Arrangements are in the care of Cooper Funeral Home, 215 W. Center St., Medina.

To order memorial trees or send flowers to the family in memory of Frank S. Ranallo, Sr., please visit our flower store.