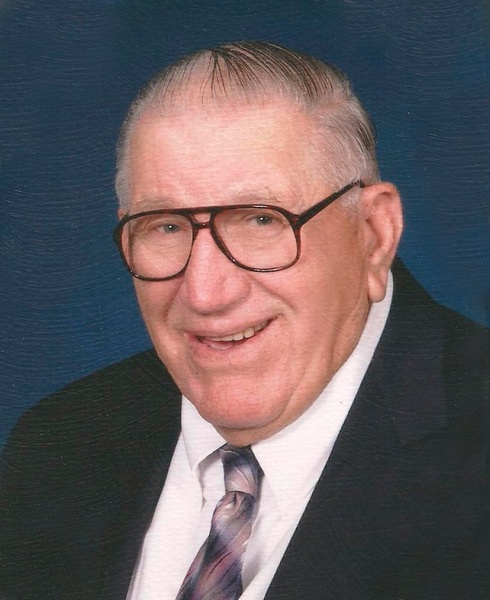 LaVerne Avery Eick, 88, went to be with the Lord on December 12, 2016 at Orchard Manor Nursing Home. Born April 7, 1928 to Avery and Helene (Schilling) Eick he was a loving husband, father, grandpa, great-grandpa and godly man who served others and lived out his faith. He was predeceased in death by his parents, a sister, Ethel Eick Button of Dansville and on August 6, 2016, his loving wife of 68 years, Beatrice. A 1946 graduate of Royalton-Hartland High School, LaVerne retired after years of being an active partner of LaVerne Eick and Sons Dairy Farm on Freeman Road, Medina. He and his wife met through the Walther League youth group at St. Michaels Lutheran Church in Wolcottsville and later became charter members of Holy Cross Lutheran Church in Middleport. LaVerne was a member of the building committee of Holy Cross and served in various rolls through the years including President of the Congregation and Elder. Together he and his wife enjoyed traveling to Virginia, Colorado and Oregon to visit family. They enjoyed extended travels to Florida after retirement and in 2002 made a special trip to Germany with the Middleport Community Choir, making lifelong friendships. During his years of farming LaVerne enjoyed his positions on the Town of Shelby Assessment Review Board and as Director of Niagara Milk Cooperative and the Orleans County A.S.C.S. Committee. He is survived by 5 children, William (Patricia) of Medina, Lee (Victoria) of Albany, Oregon, Patricia (Mike)Bielicki of Medina, Kenneth (Kelly) of Medina and Connie (Jeffrey) Holt of Montclair, Virginia. He was also blessed by 16 grandchildren and 21 great grandchildren, several nieces and nephews. Family and friends may call at the Cooper Funeral Home, Medina on Tuesday, December 20th from 4 to 8 PM. Funeral Service will be held at Holy Cross Lutheran Church, Middleport on Wednesday, December 21st with viewing from 10 -11 AM and the Service following at 11 AM. Burial will follow at the Mount Pleasant Cemetery in West Shelby. In lieu of flowers, memorials may be made to Holy Cross Lutheran Church, 133 Telegraph Road, Middleport, NY.
To order memorial trees or send flowers to the family in memory of LaVerne Avery Eick, please visit our flower store.