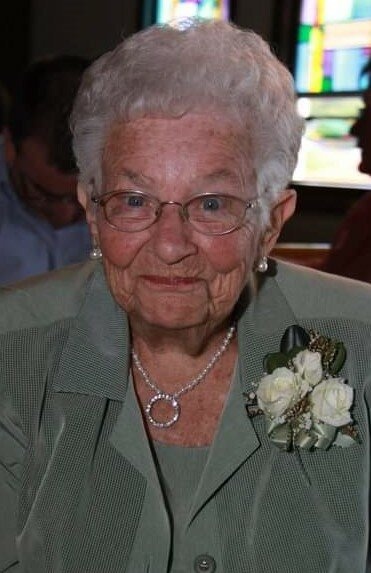 Margaret Koneski (nee Dillon), passed away on Friday, May 20, 2022 at the Absolut Center for Nursing & Rehab in Gasport at the age of 98.

Mrs. Koneski was a daughter of the late Henry and Harriett (Jedrzejewski) Dillon, born in Medina on July 24, 1923. She graduated from Medina High School and married William A. Koneski on April 6, 1942. Mrs. Koneski was employed for many years at the New York State Department of Labor Unemployment Division. She was also a long time parishioner of Holy Trinity Catholic Parish, St. Mary’s Church. Mrs. Koneski served as president of the Lincoln Post #1483 VFW Ladies Auxiliary, president of the Niagara County Council VFW Ladies Auxiliary and also of District #7 VFW Ladies Auxiliary. She also volunteered at Medina Memorial Hospital and enjoyed knitting and being outdoors.

In addition to her parents, she was predeceased by her husband, William A. Koneski in 1983; daughter, Pauline Zuczuski; grandson, Robert Bramer; and brothers, Richard Dillon, Gordon Dillon and Henry “Matt” Dillon.

Her Mass of Christian Burial will be celebrated on Tuesday, May 31 at 11am at Holy Trinity Parish, St. Mary’s Church, 211 Eagle St., Medina. Arrangements are in the care of Cooper Funeral Home, 215 W. Center St., Medina.

To order memorial trees or send flowers to the family in memory of Margaret Koneski, please visit our flower store.