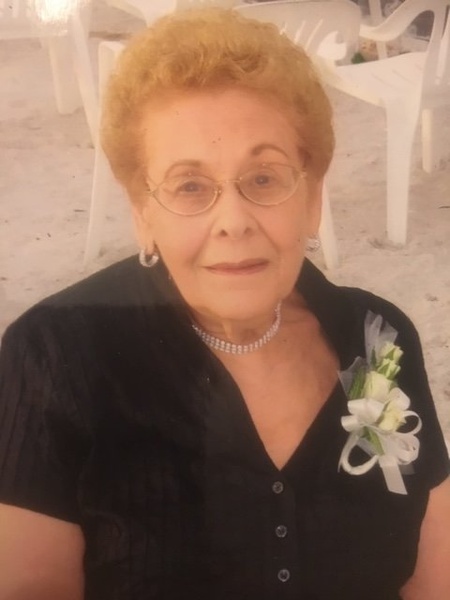 Born February 10, 1929 in Cambridge, Mass., Mrs. Moriarty was a daughter of the late Ray Oliver and Madeline (Jewell) Briggs. She graduated Valedictorian of her class in 1946 from Royalton-Hartland High School and went on to earn an Associate’s degree from Bryant & Stratton College. On June 28, 1947 she married James W. Moriarty at St. Mary’s R.C. Church and together they raised a family of five children. Mrs. Moriarty was employed as one of the original staff at Orchard Manor Nursing Home in 1973. She was the business manager and retired as assistant administrator in 1993. She was a parishioner of Holy Trinity Catholic Parish, St. Mary’s Church. An active volunteer, she headed up the Catholic education program and the R.C.I.A. program for 24 years. Mrs. Moriarty was a member of Court Santa Maria #295, Catholic Daughters of the Americas and the St. Mary’s Mother’s Club. She served as the travel coordinator for the Senior Citizens of Western Orleans. Mrs. Moriarty travelled extensively over the years with her husband and later with the Senior Citizens. She visited such places as the Middle East, Yugoslavia and Egypt. Whether she was working, volunteering or traveling, Mrs. Moriarty loved to be active and loved being with other people.

Mrs. Moriarty was predeceased by her husband, James on September 17, 1995; her brother, Richard Oliver; and sister, Joyce Rathmann.

In lieu of flowers, memorial donations may be made to Holy Trinity Catholic Parish or to Senior Citizens of Western Orleans, 615 West Ave., Medina, NY 14103.

To order memorial trees or send flowers to the family in memory of Marguerite J. Moriarty, please visit our flower store.