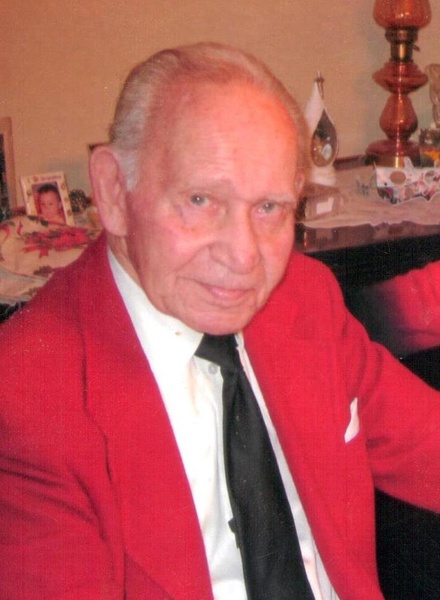 A son of the late Joseph and Nancy (Redner) Baker, he was born February 23, 1921 in Buffalo, living his later years in Medina and Middleport.

Mr. Baker graduated from East High School and and went on to attend Chown’s Business School in Buffalo, where he met his future wife, Eleanor Kavanaugh.

A proud U.S. veteran, Mr. Baker fought for his country in WWII, serving in the Army Air Force from 1942-1945. He was a member of the 486th fighter squadron, 352nd fighter group and fought in Ache, Belgium during the Battle of the Bulge.

He was dearly loved by all who knew him. He will be remembered for his kindness to all creatures, especially “Pumpkin”. His wit, beautiful smile, kind heart and giving nature made it an honor to call him your friend. Mr. Baker enjoyed a good political discussion, which he was blessed to be able to participate in until his passing. His children, grandchildren and great-grandchildren were the lights of his life.

There will be no prior visitation. His Mass of Christian Burial will be privately held by the family. Interment will be in St. Stephen’s Cemetery, Middleport, where full military honors will be accorded at graveside. The family wishes to extend a special thanks to staff and caregivers at Niagara Hospice for their kind and loving care given to Ted at his home. In lieu of flowers donations may be made to Niagara Hospice, 4675 Sunset Drive, Lockport, NY 14094. Arrangements are in the care of Cooper Funeral Home, Medina.

To order memorial trees or send flowers to the family in memory of Theodore E. Baker, please visit our flower store.